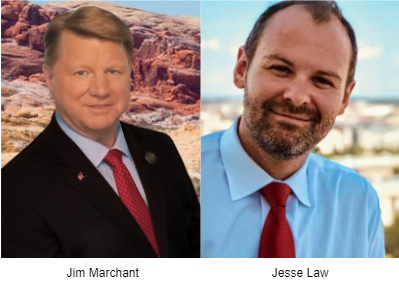 Jim Marchant has been a leader and innovator in the computer software, Internet, and telecommunication industries beginning in 1984. He has founded and served as CEO and President of numerous technology companies.

In 1984 Jim founded and operated a computer software company and sold computers and software throughout the country.

In 1994 realizing the potential magnitude of the Internet, Jim founded and operated one of the first Internet service provider companies in the country. Being a pioneer in the Internet industry, Jim fought efforts by the Government to overly regulate the new revolutionary technology. And for that reason, Jim founded the Federation of Internet Service Providers of America (FISPA) and served as President for six years.

Under Jim’s tenure, FISPA formulated laws and lobbied the US Congress, FCC and State legislatures to enact most of the cyber laws that are in effect today.

Jim successfully lobbied against Internet taxation in Florida during the mid to late 1990s, receiving national press attention from both print and TV news media. This effort set a national precedent for no taxation on Internet access. As a result, most state legislators and the US Congress passed bills that would exempt consumers from paying sales tax on Internet access as well as no sales tax on online purchases through the Internet.

In addition, Jim successfully lobbied state utility commissions and the FCC to prevent the Internet from being classified as a utility keeping the Internet open and free from government regulatory control.

In 1999 Jim was appointed by the Florida Legislature and Florida Governor Jeb Bush to serve on the Florida Information Service Technology Development Task Force. This task force was established to automate Government agencies using the Internet to facilitate online interactions with its citizens.

In 1998 Jim raised approximately $17 million dollars to start one of the first VOIP telephone companies in the country and served as the CEO and President.

After retiring in 2003 Jim moved to Nevada in 2005 and continued to be active in politics.

In 2016 Jim ran for and won the Nevada State Assembly seat representing District 37 in Las Vegas. He served on the Commerce and Labor, Energy, Taxation and Government Affairs Committees.

In 2020 Jim ran for Congress for Nevada’s Congressional District 4 and was a victim of election fraud. Jim was endorsed by President Donald J. Trump, Congressman Jim Jordan, Congressman Andy Biggs,

In February of 2021, Jim announced his intentions to run for Secretary of State in Nevada. His number one priority will be to overhaul the fraudulent election system in Nevada.

Jesse Law is a public affairs specialist and a political campaign strategist with 14 years of political and public policy operations who was just elected Chairman of the Clark County Republican Central Committee.

Law has served in both 2016 and 2020 as the Nevada Director of Election Day Operations for the Donald J. Trump for President, Inc. Campaign where he trained over 1000 volunteers and attorneys to observe the vote and report anomalies and potential fraud.

Law served on the Presidential Transition Team in the General Counsel’s office where he worked with Cabinet Level nominees to prepare them for their eventual confirmation.  On January 20, 2017, Law was appointed by the President to serve as the White House Liaison for the Export Import Bank of the United States, serving as a Senior Vice President, Chief of Staff and Chief Strategy Officer for that agency at different times.

In 2015, Law served as liaison between the Nevada Republican Party and the Trump Campaign operations.

Classically trained in opera, Law has performed as a vocalist in opera and rock and performed the national anthem for President Trump. He was a featured soloist at the Rock and Roll Hall of Fame, the Republican National Convention, and the Toshiba Golf Classic. Law is a father of three.

Posted by SCS Conservatives Club at 9:07 AM